When thinking of psychedelic medicine, the drugs that come to mind are often the classic psychedelics like LSD and psilocybin. Research chemicals like 4-HO-MET or 2-CB may also fall into this line of thinking. But people often overlook the importance of non-psychedelic drugs like ketanserin that aid in further discoveries in the field.

By antagonizing 5-HT2ARs, ketanserin induces platelet aggregation.3 Its platelet aggregating capacity, however, is not directly what distinguishes it in psychedelic research. Ketanserin’s strong, selective inhibitions at 5-HT2ARs allows researchers to understand what drug effects are based on 5-HT2AR activity. In addition, ketanserin helps researchers understand the activity and effects of other serotonin receptors such as 5-HT1AR.

In the 1980s, scientists discovered that Ketanserin shows the most activity at the 5-HT2 receptor.4 They also observed that ketanserin had 1.5 times lower binding affinity at 5-HT1Rs than 5-HT2Rs. Its stronger affinity at 5-HT2Rs  made it the first selective serotonin antagonist. Research has since delineated receptor subtypes, with a major focus on 5-HT2AR activity in the treatment of depression.5  It is proposed that psychedelics’ therapeutic action occurs primarily at the 5-HT2A receptor site, whereas antidepressants act primarily upon the 5-HT1A receptor site.5,6 Understanding the difference between these two pathways is of critical importance in understanding the role of the 5-HT2AR in psychedelic studies. Thus, ketanserin antagonism at 5-HT2ARs is essential to the study of psychedelic drugs.

Selective serotonin uptake inhibitors (SSRIs) enhance extracellular levels of serotonin through reuptake inhibition, increasing postsynaptic 5-HT1AR signaling.5,6 This results in decreased stress, aggression, and anxiety. Psychedelics increase signaling at 5-HT2ARs, which is associated with a decrease in rigid thinking, pessimism, and an increase in adaptability.6  Researchers studying psychedelics use ketanserin to delineate which effects of psychedelics are attributed to activity at 5-HT2ARs, versus at other serotonin receptor subtypes.

A more recent study conducted in 2017 revealed that the positive effects of LSD are strongly correlated with 5-HT2AR activity.8 The general subjective effects of LSD were fully inhibited by the administration of ketanserin (Figure 1). 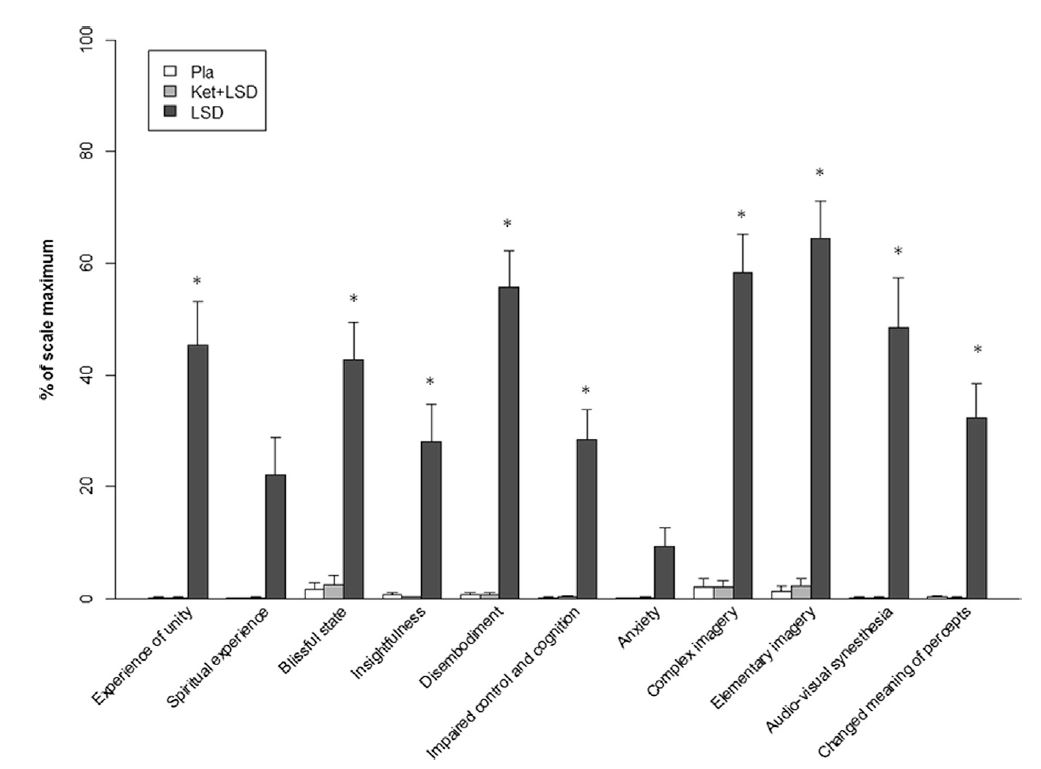 When LSD was administered in conjunction with ketanserin, typical LSD-induced effects such as the experience of unity, blissful states, and imagery, decreased, scored using the 5-D Altered States of Consciousness (5-D ASC) scale. The ketanserin group showed significantly lower, near-zero, scores for mystical experiences, autobiographical experiences, and spiritual experiences related to the therapeutic effects of LSD. Ketanserin administration in conjunction with LSD attenuated meaningful experiences overall. These findings suggest that 5-HT2ARs play a large role in mediating the general subjective experience of LSD. 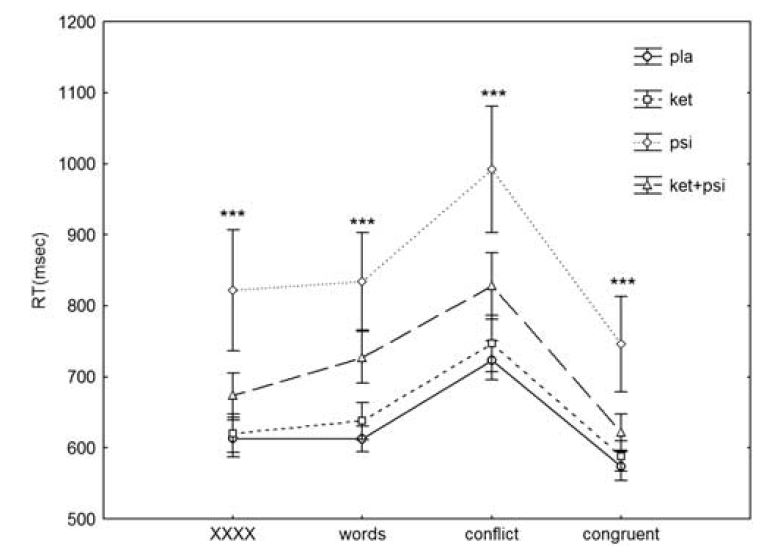 When ketanserin was administered in combination with psilocybin, researchers noticed significant changes in response time on the Stroop Task (Figure 2). Most of the hallucinogenic effects of psilocybin were neutralized by ketanserin as well.

Ketanserin is of prime importance in psychedelic research because of its ability to selectively inhibit 5-HT2A receptors with much less activity at 5-HT1A receptor sites. By using a selective serotonin inhibitor, researchers are able to infer what neural regions are dependent on 5-HT2AR mediated processes. Current research emphasizes the importance of the 5-HT2AR subtype of serotonin receptors in mediating the effects of psychedelics in humans. Specifically, as pointed out by the Preller et al. study, the 5-HT2AR subtype is critical for the generation of meaning during a psychedelic experience. Ketanserin studies further the understanding of the neural underpinnings of subjective, therapeutic effects of psychedelics.

Melody Pezeshkian holds a B.S. in Psychological and Brain Sciences and has worked in the fields of brain science, mental health, and psychedelic medicine.

Those dosages are very incorrect and not in line with the study being referenced.

Hi Chris – Thanks for pointing out that typo. I made the corrections.

So, is ketanserin the “LSD off switch” that MindMed is developing? https://psychedelicreview.com/stopping-bad-lsd-trips-with-off-switch-technology/