The Relaxed Beliefs Under Psychedelics: The REBUS Model

Dr. Robin Carhart-Harris‘s REBUS model has received much attention for its purportedly unifying account of the effects of psychedelic drugs on global brain dynamics.1 REBUS is an eloquent marriage of the entropic brain hypothesis and hierarchical predictive coding. The entropic brain hypothesis proposes a kernel function of the brain to be the restriction of entropy associated with spontaneous neural activity. Importantly, it states perhaps the defining act of psychedelic drugs is the elevation of this entropy, eliciting a corresponding increase in the richness of the content of conscious experience.2,3

Predictive coding is the view that the brain is a hierarchically organised system that functions as a prediction engine.1 Under predictive coding, our perception is a generative mental model that is algorithmically optimised through a prediction error minimisation scheme. Prediction errors are the difference between the higher-level priors (expectations) a brain has about the world and the conflicting bottom-up information about the world the brain receives through sensory channels.4-6

REBUS postulates that the 5-HT2A receptor, the holy grail of classical psychedelic pharmacology, possesses a perhaps unique expression profile on cells across cortical regions deemed to be at the uppermost ranks of the brains hierarchy.1 As shown in Figure 1, it crucially suggests psychedelics act by deweighting the precision of higher-level priors, which concomitantly liberates the influence of information ascending the hierarchy, resulting in a situation where the functional hierarchy is flattened. In other words, the brain becomes anarchic, and a corollary of this is deemed to be that the variational free-energy landscape of the brain is flattened. That is to say that the brain is able to explore its repertoire of possible states with greater ease, as suggested by more temporally diverse or entropic brain activity. 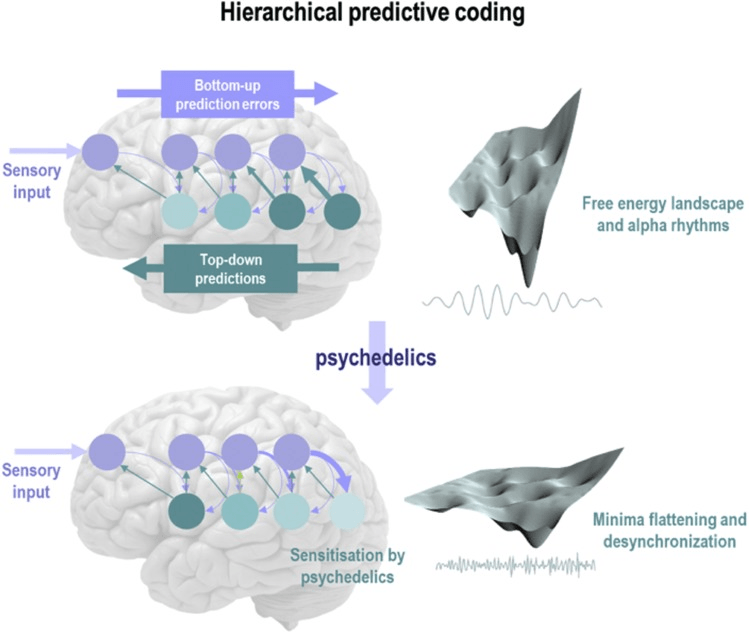 Figure 1: Schematic illustrating the basic computational architecture of hierarchical predictive coding, including top-down predictions and bottom-up sensory signals.1 Also illustrated is the recurrent neuronal message passing that attempts to minimise the discrepancy between the two, known as prediction errors. REBUS proposes psychedelics to act via disrupting the precision of higher-level priors (expectations), increasing their sensitisation to prediction errors, resulting in an implicit flattening of the brain’s functional hierarchy, and a reduction in the curvature of the free-energy landscape.

Furthermore, LSD and psilocybin have been shown to reduce the hierarchical differentiation of the transmodal versus unimodal cortex.9 Nonetheless, the idea that the energy requirements for brain-state transitions are reduced under psychedelics had remained untested, until a recent prodigious study performed by Stephen Parker Singleton and colleagues.10

Firstly, as shown in Figure 2, the study clustered brain activity into recurrent states and sought to characterise how the LSD changes the temporal dynamics of how the brain occupies these states. Singleton et al. showed that LSD induces a decrease in the persistence (occupation over time) of states dominated by activity in frontoparietal networks, networks associated with executive functions. This effect was accompanied by an increase in the persistence of states dominated by activity in somatomotor and ventral attention/salience networks, networks associated with the effective sampling of sensory data. These results are fascinating since they correspond to REBUS’ designation of top-down and bottom-up activity respectively, and thus the effective flattening of the brain’s functional hierarchy.

Next, Singleton et al. leveraged recent developments in network control theory (NCT) to quantify the minimum energy required to transition between pairs of brain states. Remarkably, they showed LSD lowered the transition energy between every possible combination of initial and final brain states. Moreover, using positron emission tomography (PET) maps for 5-HT2A expression, they showed that energy injection at these specific locations in the placebo data set could induce a flattened energy landscape. The mechanistic pertinence of this specific receptor was further demonstrated by the fact that the same protocol performed for other targets of LSD, such as 5-HT1A, did not flatten the energy landscape to the same extent. 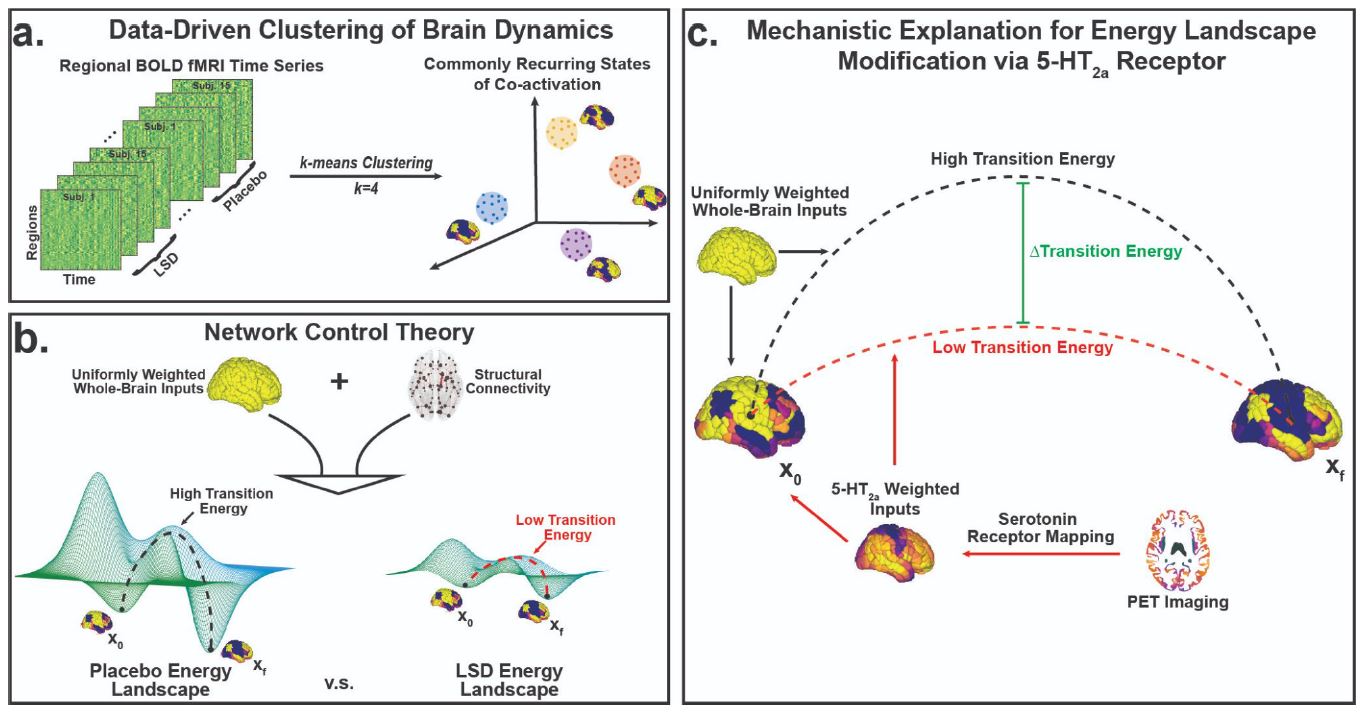 Figure 2: 10 Click to enlarge. a) Functional magnetic resonance imaging (fMRI) time series were concatenated and then subject to k-means clustering algorithm to identify temporally recurrent states of brain activity b) NCT was leveraged to calculate minimum brain-state transition energies after ingestion of placebo or LSD. Results show LSD to flatten the energy landscape of the human brain. c) Weighting the energy calculations from the placebo data set with PET data for the spatial topography of 5-HT2A receptor expression resulted in a flattened energy landscape, emphasising the mechanistic importance of this receptor.

Lastly, Singleton, et al. showed that the flattened energy landscape induced by LSD resulted in a heightened frequency of brain-state transitions and that these transitions did not compile into a predictable sequence. In fact, they demonstrated that the greater a subject’s energy landscape was flattened the more entropic their brain-state time series became, thus providing support for another key tenet of REBUS.

Rounding off, while the study corroborates a number of claims made by REBUS, there are a number of outstanding questions. For example, the LSD fMRI data set used in the study is the same LSD data set that was no doubt used to aid in the formulation of REBUS. Ultimately there are only 15 participants in the data set, thus greater data acquisition is imperative to see how well REBUS’ claims generalise.

Another aspect of REBUS that future research would do well to flesh out is the “improved ability to see the bigger picture” logically implied by energy landscape flattening.1 Additionally, the phenomenon of fact-free learning is relevant to energy landscape flattening, that is learning not by the accumulation of new information but by the acquisition of a novel frame of reference on already attained information.11

Notwithstanding, this paper is a wonderful addition to the roster of recent receptor-informed whole-brain computational models investigating the effect of psychedelics on global brain dynamics.12-15 Fundamentally, it is a beautiful exposition of what is perhaps the most prominent and comprehensive model of psychedelic drug action to date, showing it to pass the initial test on one of its most pivotal claims.